Scientists from the Icelandic Met Office and the Institute of Earth Sciences and representatives of the Civil Protection in Iceland attend the meetings of the Scientific Advisory Board of the Icelandic Civil Protection. Also, representatives from The Environment Agency of Iceland and the Chief Epidemiologist from the Directorate of Health, were present.

o The eruption sites are the same as before. Lava flows to the East at similar rates as yesterday. Although the lava is now in contact with the river   Jökulsá á Fjöllum, it does not reduce the lava flow rates significantly. No explosive activity due to the lava and river water interaction has been   observed, but steam rises from the lava.

o The extent of the lava is now approximately 19 square km.

o No activity is now detected on the southernmost fissure although small amounts of gas and steam are rising from it.

o Measured concentrations of SO2 in Reyðarfjörður, suggest that people with underling respiratory problems might be affected although others should not experience any significant discomfort.

o Efforts to increase the gas monitoring in inhabited areas are on-going, by The Environment Agency of Iceland.

o If eruptive activity continues at similar rates, the air quality in Eastern part of Iceland, will remain similar.

o Scientist on site, have had to leave the area as concentrations of gas reached dangerous levels, due to sudden changes in wind conditions.

o At the eruption site local wind anomalies can occur due to thermal convection from the hot lava. This makes the conditions on site extremely dangerous as winds can change suddenly and unpredictably.

o The migration of magma could stop, resulting in a gradual reduction in seismic activity and no further eruptions.

o The dyke could reach the Earth’s surface at different locations outside the glacier. Lava flow and/or explosive activity cannot be excluded.

o The intrusion again reaches the surface under the glacier and possibly leads to a significant eruption. This would most likely produce a flood in Jökulsá á Fjöllum and perhaps explosive, ash-producing activity.

o An eruption in Bárðarbunga. The eruption could cause an outburst flood and possibly an explosive, ash-producing activity. In the event of a subglacial eruption, it is most likely that flooding would affect Jökulsá á Fjöllum. However it is not possible to exclude the following flood paths: Skjálfandafljót, Kaldakvísl, Skaftá and Grímsvötn. 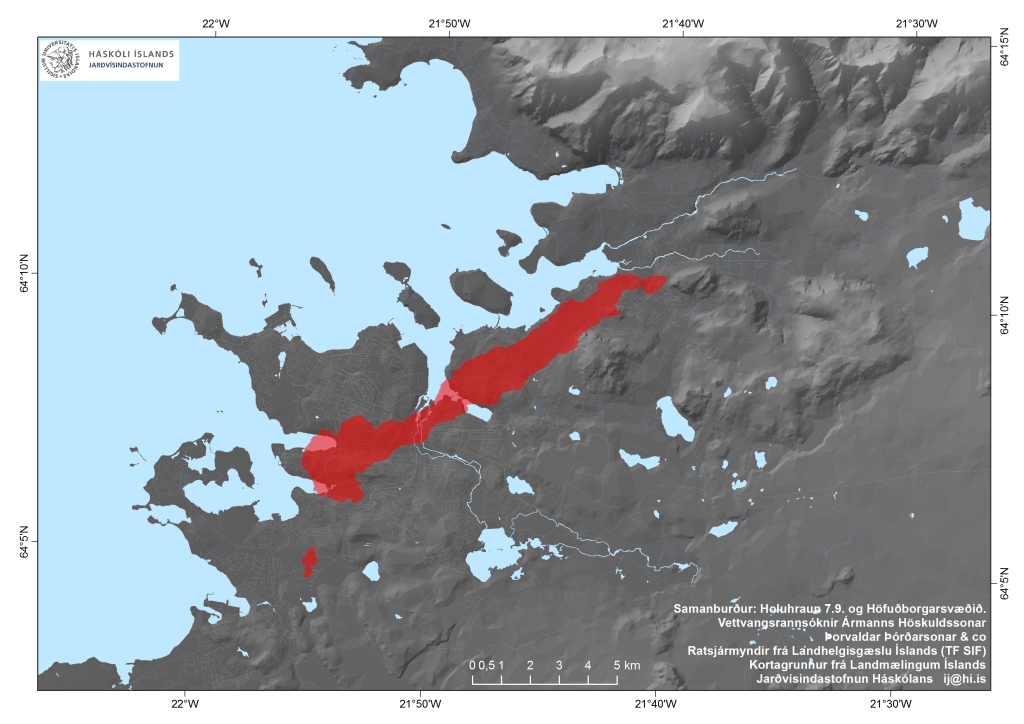 The lava from the Holuhraun eruption compared to Reykjavík. Picture Institute of Earth Sciences University of Iceland.