Today (Sunday), gas pollution can be expected in the NE of Iceland.
Tomorrow (Monday) the pollution will move to the east and later southeast of the eruption site.
We are expecting the first real snowstorm this autumn on Monday morning, especially in the north. The weather forecast for Sunday is fair with some rain, but changes in the weather are expected on Monday morning. Those who are driving around the country are advised to use Sunday for travelling as driving conditons may change. The forecast from the Met Office is southwest or variable wind 3 to 10 m/s. Widely occasional rain. Temperature 2 to 8 deg. C. Increasing north wind in west part tonight and snow. North strong gale (15 to 23 m/s) in most places tomorrow, lighter wind in south and west until afternoon. Snow in north part, but some snowshowers in south Some rain or snowshowers in the south part. Becoming colder tomorrow, widely frost 0 to 5 deg,C , but above zero deg, at the south coast. More information on the weather can be found on the Met Office webpage http://en.vedur.is/ and information on road condition http://www.vegagerdin.is/english/road-conditions-and-weather 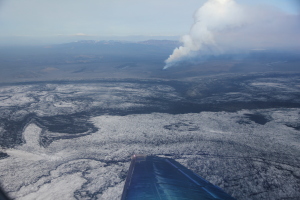